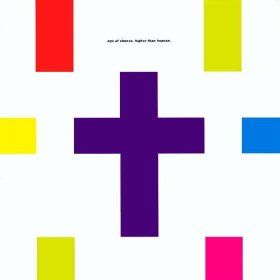 Age of Chance are probably best remembered for their brilliant cover version of Kiss, which came out in a myriad of covers and mixes in 1986.

The band first came to the attention of most indie fans due to their inclusion on the infamous C86 NME compilation tape. After a couple of Peel sessions the band signed to FON records and recorded the cover of Kiss and a mini album Crush Collision, the re release of which came with a free single sided 12" featuring another mix of Kiss.

In 1987 the band signed to Virgin and recorded an album, the first by a UK group to incorporate a DJ scratching and sampling. One Thousand Years of Trouble was released in September 1987 and was completely novel, no indie band made sounds like this. I had the good fortune to see them around October/November 1987 in Aberdeen and found the live show absolutely stunning, although I was suffering from concussion at the time. DJ Powercut was an integral part of the set up by then and the live scratching and sampling certainly added to the sonic crush symphony the band produced.

During the following year the original vocalist Steve E left during the recording off the follow up album. A new vocalist was drafted in, Charles Hutchinson to completely re vocal the LP. When I first heard the resulting album Mecca, I was completely dismayed, gone was the sample heavy, beat laden, near industrial sound of old replaced by what I thought at the time was a terribly weak soul lite sound. I have had reason to reappraise this album over the years and now find that it is not as bad as I thought and quite a few of the tracks are actually rather good but completely different from the likes of Who's Afraid of The Big Bad Noise? or Take It from the debut album.

The band eventually split in 1991, after a career that failed to trouble the charts but did earn a No 2 position in the festive 50 of 1986 for Kiss which also hit number one in the indie charts the same year.

Posted is the standout track from the second album, Mecca, the soulful Higher Than Heaven. Which was released as a single in 1990 and reached the giddy heights of #53in the UK.

Age Of Chance - Higher Than Heaven
Posted by drew at 11:36

Loved this one when it first came out. There was a remix which I played constantly but haven't listened for years. Thanks for reminding me of this and the mix https://www.youtube.com/watch?v=o208e_banPQ

Still sounding good to to these ears. Have we heard the concussion story?

Not heard that mix before, thanks for that.

Yeah Brian back in 2016 on a previous post on AoC.

It’s coming back to me.