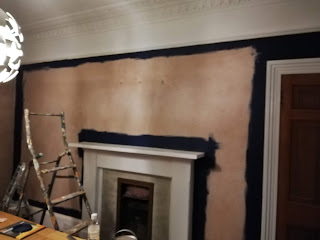 I have been debating whether to complete this set of posts or not. it seems a bit, well even more self indulgent than normal but didn't want to leave it just hanging.

So here you go, the final instalment.

We left it with the walls drying out and the floor varnished.  By the Tuesday night the walls had dried out and the plastered wall now a blotchy pink colour which Max thought looked "pretty good, I would just leave them like that". Let's just say that Max has less taste than that Llewelyn-Bowan fella that used to be on British TVs for a good few years. Lynn had decided that the fireplace wall would be a navy blue colour, the paint was actually called Sapphire something or other, and the other walls would be white. I have to admit that Lynn does have an eye for colour as when it was finished even I was impressed. 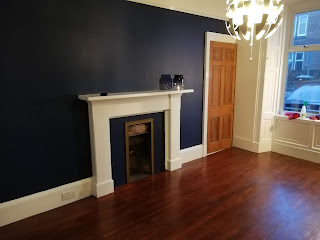 So then it was time to decide where to hang the pictures, move back in the hi-fi equipment and play the first record, the building of the other Kallax unit could wait until the weekend 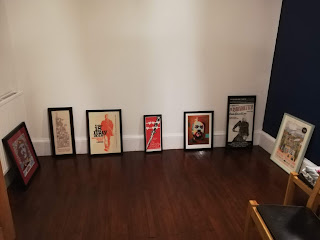 Bright and early on the Saturday morning I started building the Kallax unit which I hoped would house all of the albums freeing up room in the cupboard that I laughingly call an office. It has been quite telling over the past couple of weeks the grand and very tidy offices some of my colleagues have on show through SKYPE as we join conference call after conference call in this new world of constant remote working. But I digress. I have to admit that i have become quite an expert at building these essential record storage items over the years, 7 of varying sizes at the last count, this onee being the daddy of them all at 5x5. 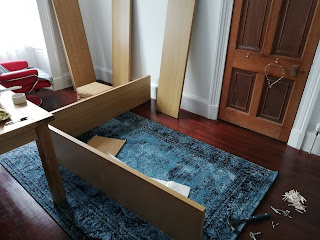 In under an hour the shelving unit was assembled and then the back breaking but fun job began getting all the records in and filed. The particular job took nearly as long as the painting but was a lot more pleasurable. 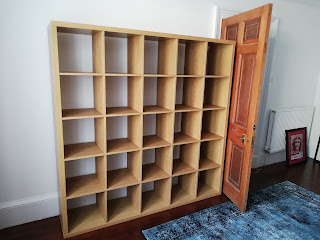 So now the room is finished and I'm pretty pleased with the results. there are about 300 12" singles that are in the cupboard along with the vast majority of the 7" singles but I reckon that it will be a while before Lynn starts moaning about "bloody records all over the place. 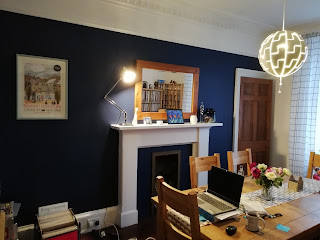 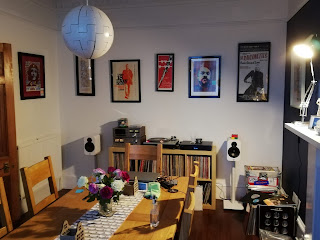 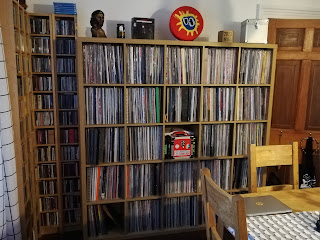 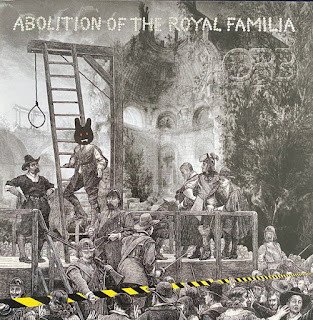 Is it Monday? I'm having trouble keeping track of the days at the moment. I am still working so I can only guess how those cooped up but unable to do so are keeping track.

One good thing that did occur at the weekend was that Ted delivered the latest album from The Orb, Abolition of The Royal Familia and very good it is too especially the final two tracks, the first couple of tracks have taken a bit of getting used to as they are quite poppy soulful numbers but after a few listens they have grown on me. Like the previous LP, No Sounds Are Out of Bounds there was also an option to purchase a dub cd of the lp. I haven't had a chance to sit and listen to it in it's entirety but did head straight for the The Weekend It Rained Forever In Dub which for me is the centrepiece of the whole album and a rather calming soundtrack for these strange times.

Oh and don't get me started about the Royal Family, when the fucking heir to the throne irresponsibly decides to decant to remote Aberdeenshire with 100 staff when he has symptoms of the disease and against all instructions from the government and police it is time to question why we still support these leeches. 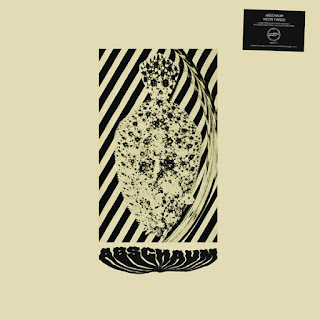 I hope everyone is bearing up under the stress of been cooped up either working from home, or home schooling the kids or if you are a key worker then stay safe, take it from me we appreciate each and every one of you that have no alternative to go out there and get on with it. When we get through the other side I hope that you all get the recognition you deserve.

Right, the music, some French Krautrock for you. Moon Tango is the title track of the debut album from the band from Lyon which is a very good trip, one for just sitting and immersing oneself in. Not a bad thing to do at present. 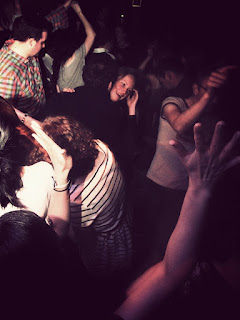 This came on, on shuffle this morning and I found myself smiling and for six and a half minutes I forgot what was going on and just listened and sang along.

Airport Girl - The Foolishness We Create Through Love IS The Closest We Come To Greatness
Posted by drew at 14:53 2 comments: 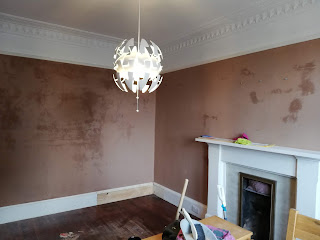 At the end of the second instalment of this mini series we were waiting Kenny to skim coat the walls. Unfortunately this was held up for a couple of weeks due to Kenny having a particularly heavy workload at the time and me telling him that I probably wouldn't be ready until the middle to the end of March. In the meantime I thought I would tackle the exploding Death Star light that I bought from IKEA at least 4 years ago. When I got it home I opened it up saw the amount of bits and thought fuck that, hence it has sat in my office for some time gathering dust since I had a couple of weeks I thought I had time, hopefully to construct the bloody thing. So on the Sunday night after making Leo's piece for school the following day I took a deep breath opened the box and took out the instructions, under ten minutes later I had the globe completed, what I thought was going to be a head wreck was an absolute piece of pish, a lot easier than any of the Lego I have had to build over the years. Next thing was to contact Joe "the spark" and arrange a day for him to fit the light. 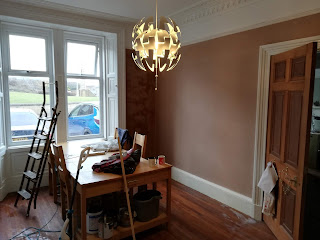 On Friday 28th Feb Kenny came and poly-bonded the walls and the following day the plastering was complete and I have to say made an excellent job of it, lovely smooth walls and very little mess. He told me that the walls should be ready by about Wednesday but definitely by the time the walls had gone a pink colour. So in the meantime I thought that I would steam, clean, sand and re-varnish the floor. 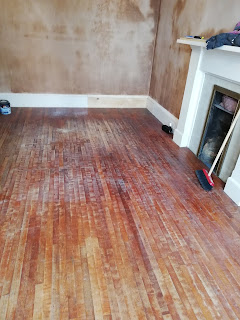 So I spent the Sunday, Monday night and Tuesday night doing this. After steam cleaning I got a bit worried that I had buggered up the floor but after a couple of coats of varnish it started to look pretty good and when the third coat was dry I was extremely pleased with it. 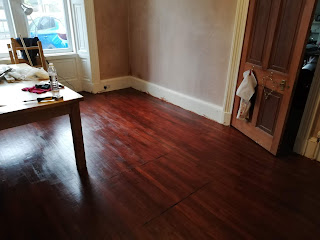 Nearly there now, just the painting to go and the furniture and records to move back in.

During all of this I had the ipod on shuffle and blasting out from the portable speaker.

The Wedding Present - Don't Take Me Home Until I'm Drunk 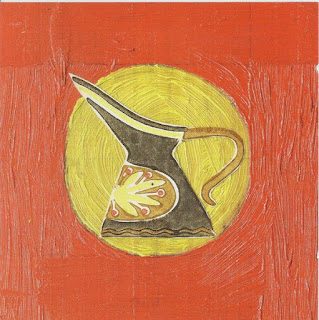 Last Thursday night at what I suspect will be my last gig for quite a few months, (Greg Dulli's next Sunday night was cancelled the following day) I witnessed something a bit special,  King Creosote with the help of 9 members of the Fence collective performed the music to the film From Scotland With Love which was playing on the big screen behind them. I am not ashamed to admit that I had a watery eye on more than one occasion.

Over the years Kenny Anderson has been rather prolific releasing over thirty albums, quite a few of which are as rare as hens teeth as they came out in small limited runs on cdr. In 2004 he released a rather dark experimental album, Red on Green under the name Kwang Creasite, today's track Jack Shit is the final track on the album.

* Sorry, I now see that this song has been posted previously not that long ago in this spot.
Posted by drew at 08:00 2 comments: 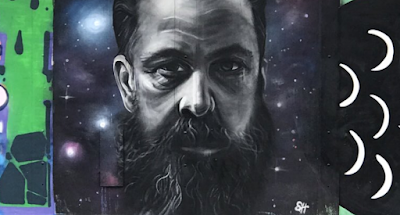 
Thank you for all the music, not just your own that you turned me on to. 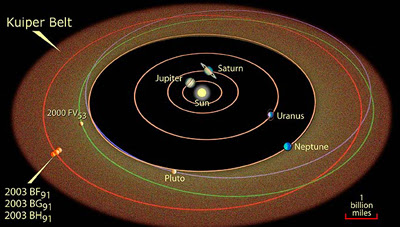