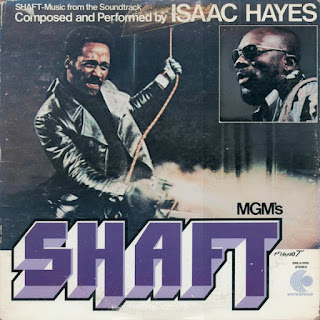 I can't think of a better way to start the week than with an extended slow burning funk groove*. Do Your Thing comes from the soundtrack from the film Shaft,  Although this is credited to Isaac Hayes the real stars of this track are the Memphis Strings & Horns and The Bar-Kays, the interplay between the horns and the wah-wah guitar is absolutely sublime, The track lasts for 19:32 and holds the attention til about the 17 and a half minute mark where it could have ended, I could have edited the last couple of minutes out but I think that it should be heard in it's entirety at least once.

* or it would have been if it had been posted in the morning
Posted by drew at 16:23

An absolutely fabulous chunk of noise, thanks for sharing this one Drew. I was going to suggest each of us start our own individual 'Long Song Monday' series, but I guess by the time we'd listened to them all, we'd be late for work.

Fuckin' hell.....I think I've only ever heard this all the way through once before in my life....even then it might have been faded out by the DJ after about 10 minutes or so....drink had been consumed!!

Long Sleeve no Monday that may be a goer Swede.