We Must Be Doing Something Right 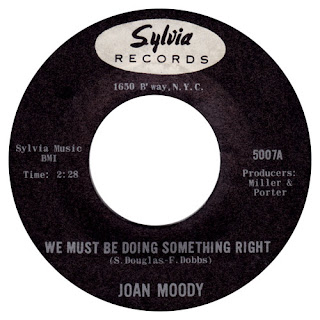 I think that Berry Gordy may have said that when he first heard this very very Motown sounding record. We Must Be Doing Something Right was released on Sylvia Records in 1965. The label was set up  by  the tenor saxophonist Al Sears who previously worked for Duke Ellington. I think that may be him playing on this lovely piece of mid 60s soul. As far as I can find out Joan Moody cut another couple of singles between 1965 - 66 which were also played on the Northern scene but nothing else until a further  previously unreleased track, I Can't Stay Away,  was released on a Kent split single a few years ago which is also very good.

Joan Moody - We Must Be Doing Something Right

I was going to call you a big fibber...and then I realsied that your words about acid house were all about the Friday series as opposed to the regular posts!

Thanks for the education today...didn't know anything about this.