I'm Waiting For The Man 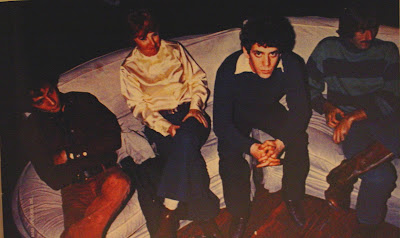 A couple of weeks ago 1969 the latest repackaging of the Velvet Underground was delivered. I had been looking forward to the arrival of this as my copies of VU and Another View, which this package basically is with some of the tracks cleaned up and a few other things from the 1969 recording sessions added,  have been around the block a few times. At first I was kind of disappointed with the sound as it is a very quiet pressing but when you turn it up to a reasonable volume you notice the difference from the albums that were released back in the 80s, there is more definition and sounds that I have never heard before or maybe I'm kidding myself on, could be. Anyway, the Velvet Underground recordings have never been held up as examples of high fidelity. Listening to this album inevitably led me back to The Complete Matrix Tapes which really does become more essential with every listen and so I thought that I would share another track from that collection and plumped for the second of four versions of I'm Waiting For The Man, all of which are great but this loose, bluesy version is my favourite which has some great guitar work from Sterling Morrison and a completely different feel to the frantic strung out version from the first album. It would have been something to have been in the audience during the Velvets residency at The Matrix in November1969.

The Velvet Underground - I'm Waiting For The Man (Matrix Tapes Version 2)
Posted by drew at 08:00

What a great version this is.

That was a really interesting take, Drew. Every time you play something from the Complete Matrix Tapes I kick myself for not having it.