Medicine For The Cerebellum 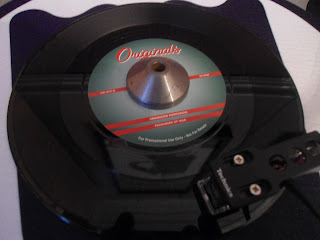 I think that it's safe to say that Steppenwolf fans are few and far between in this little corner of the world wide web. I wonder if today's record will float your boat more.

Organised Konfusion were an early 90's hip hop duo from Queens who although not commercially successful were acclaimed within the hip hop world for the rhymes of Prince Po and Pharoahe Monch. In 1991 the pair released an astounding self-titled debut album which they produced themselves which earned the duo critical acclaim but very little in the way of sales.  They recorded a further two albums before splitting in 1997.

Prisoner of War is lifted from that debut album and liberally samples the Mexican, a track by a British rock band from 1970. You will probably be familiar with the tract if not the artist as it has been sampled by loads of people from African Bambaataa, Jungle Brothers and Grandmaster Melle Mel amongst many others and covered by Jellybean Benitez. The lyrics of the original song were supposed to put right the inaccuracies of the John Wayne film the Alamo with regards to the Mexican troops and the tune contained parts of Per Qualche Dollaro In Pui by Ennio Morricone's score from A Few Dollars More.


Organised Konfusion - Prisoner of War
Posted by drew at 08:00

I'm listening as I type.

I'm guessing this lot would have got lumped in with Disposable Heroes of Hiphoprisy.

This is superb. Absolutely superb.

You mentioned sampling from "The Mexican" by a Brit. group in 1970?? NOT familiar with it. Name of the band, please?

That'll be Babe Ruth then.