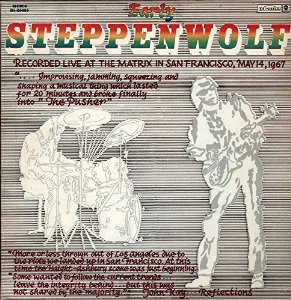 Before becoming synonymous with that tosser Jeremy Clarkson getting all macho in cars that very few people can afford the petrol to go round the track in never mind the car or their inclusion in crappy dad rock compilations , Steppenwolf were known as a blues rock outfit who had more than Born To Be Wild to their name.

Initially from Toronto and called the Sparrows. The band found themselves in San Francisco during the summer of love and playing venues such as the Matrix, the same venue that recordeded those memorable Velvet Underground shows a couple of years later.  Like a lot of the bands around at the time, they would get on stage and "experiment" or as we up here in the west of Scotland would call it,  fannying about.

On the 14th of May 1967 one of these gigs was recorded and released a few years later once the band had made established a following,  as the Early Steppenwolf album. This was one of the albums I was given by one of the hippies that I hung about with when I was fourteen. Side one of the album is made up of  pretty straight up blues rock originals and covers only identifiable as Steppenwolf by John Kay's distinctive vocal style. Side two is a different beast entirely, the whole side is made up of one of those "experiments" which lasts for 20 minutes and at around the 10 minute mark morphs into a rather brilliant version Hoyt Axton's The Pusher,  later used to great effect in Easy Rider.

I think that this track has to be listened to in it's entirety at least once but these days I usually put the needle down half way across the vinyl and listen from there. To save you listening to a lot of what you would probably be considered noise or tuning up I have ripped it from about the 10 minute mark.

Just listened to the rip and for some reason the vocal can't be heard very clearly. I will re-rip later today.
Posted by drew at 08:59

brave move on your part to post this lot. some of us 'fought wars' to cleanse the airwaves of such pollution.

Nah JC, you can't lump Steppenwolf in with the worst excesses of the proggy pish