Brevity Is The Key 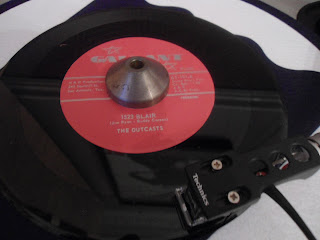 We're back with the Garage Rock this Tuesday and what for me is the sonic equivalent of a flamethrower leaving nothing but scorched earth in it's wake.  The Outcasts have featured here before with their glorious I'm In Pittsburgh And It's Raining which which I thought was a short song but the sixth and final single from the band from San Antonio, Texas is not likely to outstay it's welcome clocking in at one minute forty-eight seconds a full ten seconds less than that previous release. The group broke up the year after this single's release in 1967 after the death from hepatitis of Buddy Carson co-writer of 1523 Blair with Jim Ryan. I think that this single is the epitome  of Texas Punk.

Flippin' 'eck! The musical equivalent of an express train passing through a station at full speed as you stand on the platform a few feet away. Exhilarating tune.

Brilliant!
I feel knackered after listening to that!

Whoa! If it had been released 10 years later on Stiff they may have had a hit on their hands. Did you know in the early '90s there was a band named after this song? They were on a label I quite like, Bomp! Never heard that particular band though, and they were only around for about a minute.