A Rite of Passage. 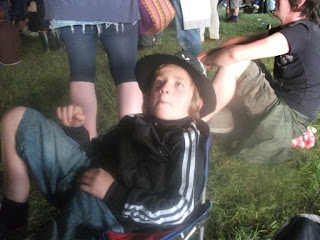 I'm sure that everybody remembers their first gig. My most vivid memories of up until that point the most important night in my life, Motorhead at the Glasgow Apollo 18-03-1982, are the smell, a mixture of extremely honking b.o. and equally as gantin' patchouli oil and how loud it was, the next day at school I learnt absolutely nothing as my ears were still ringing and I remember being scared that my hearing would never recover.

The reason I bring this up is that tomorrow night Max will attend his first concert proper. When he was 8 months old he was present when Camera Obscura and Belle and Sebastian amongst others were part of the School's Out event in the Botanic Gardens in Glasgow. Later when he was 8 years old we went to the Latitude festival where he was impressed by Edwyn Collins, Wanda Jackson and Mark Lanegan, however his highlight was the Vaccines. But the Wedding Present at the ABC Glasgow will be the first real gig in a true concert venue. He is really looking forward to it, I can tell but being a teenager he is doing his best to look like he's not bothered.

The Wedding Present will be performing the George Best album in full which is not one of Max's favourites, he's more a Bizarro and Take Fountain kind of guy but I'm sure that he will get a new found appreciation for the album after hearing it in the live setting. I am also hoping that Gedge will do his usual mingling with the crowd before and after the band performs and then Max can eventually meet the man he calls David and who has previously signed two t-shirts for him and those lyrics especially Kennedy are imprinted in his memory. As you would expect Leo is kind of pissed off that he can't go.

* the picture is Max at Latitude in the tent waiting for the Vaccines to come on
Posted by drew at 09:56

What a great first gig for him. For one reason or another, I didn't manage my first gig till I was in my 20s... and then it was only Ocean Colour Scene. Still, could have been worse...

A big moment he will remember the rest of his life. Sounds like his parents are bringing him up right.

Sounds like a good one for a first gig. Enjoy it, both of you.

Better than taking him to see Aidrie Drew!

I'm sure it'll be special.I was at the botanics gig,had an excellent day. It was that good I was home in bed before 11.

Looking forward to reading the review of the night in due course.