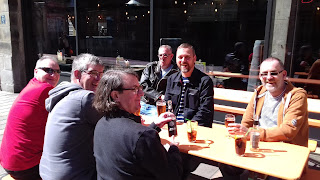 Well. that is a weekend I never want to repeat, a bigger bunch of tossers I have never met in my entire life!**

But to the important work. I am at a loss today. I literally do not have the words to describe how absolutely amazing today's featured band is in the eyes of, mind blowingly,  millions of people. It is difficult to convey the absolute genius of Chris Martin's lyric writing or the incredible innovation present on the band's albums.

I have many fond memories of listening to Parachutes while renovating the living room and stairwell of L and I's previous house. Stripping back the walls to the plaster, re-skimming them and then applying new skirtings and facings thoughout. In fact every time I look at a particularly tricky angle on a dado rail going up a staircase the words " look at the stars, look out they shine for you" fill my head. Similarly when I see a tin of  Ronseal Mahogany varnish I get a "Shiver". Good times indeed, coming home from work and then starting on whatever needed to be done until the wee small hours as I was on a deadline that it all had to be completed before L's hen night.

So you would think that I would obviously pick a track from Parachutes but no, the Coldplay ouevre is just so damned good,  with the band  breaking new ground with each album,and all the time  winning over more and more fans as they progressed, it has been incredibly difficult to pick just one track to feature today. It could have been Fix You with the deeply profound :-

Or I could have selected, God Put A Smile On Your Face, Every Teardrop Is a Waterfall, Violet Hill or Viva la Vida . Only a few examples of the abilities of these four earnest, educated young fellows. It has been a tough choice, and a difficult listen, trust me but I finally picked an album track from the group's second long player A Sudden Rush Of Blood To The Head, Green Eyes which starts with the unforgettable lyrics :

Honey you are the rock
On which I stand
And I came here to talk
I hope you understand.

Nothing more need be said, I think.

** I'm just kidding,  a better bunch of guys it would be hard to find which the photo above doesn't quite capture.  I had an absolutely blast and I thank Dirk for coming up with the idea and for everybody who took planes, trains and automobiles to be in Glasgow at the weekend.

As I sit here in the Amsterdam airport, I'm wishing for an Irn Bru... to be poured over your head. I'm with you. Coldplay stands right up there with the greats that have appeared on JC's pages. Paul Young and Billy Joel come to my mind.

Drew, what can I say? It was a pleasure meeting you and the rest of the fellas. The match was a joy, and I wish the squad nothing but success in the playoffs Wednesday, Saturday and, hopefully, beyond. Will spin some Northern Soul when I get home in your honor. Take care.

i was not sure whether to even play this track. I would not have known it was Coldplay if you hadn't said, and even then I had to check that they had in fact done this. It's almost passable and I've certainly heard a lot worse.

Sounds like you all had a really great weekend.(I believe you met a friend of mine in the Bon Accord, the rather large gentleman who arrived on his bike).

We did that George. I can confirm CC was rubbered on Friday evening.

Such a moving post. One that quotes lyrics of passionate beauty rarely seen since the days of Dylan. Or somesuch. Its hard to know what to make of a weekend that had some of the saner, trustworthy music commentators going in and had a bunch of lads posting Coldcut after it. Someone brought a bag of tablets to the party??

Sounds like it was a brill time and a summit of some sort was had. Goodmen

So glad to see that everything went off with an appropriate bang this weekend in Glasgow...as for this virus that has infected our corner of the Blogosphere...I hope it passes quickly, very quickly...

You caught all our best sides in that photo Drew.