First Round of The Play-Offs 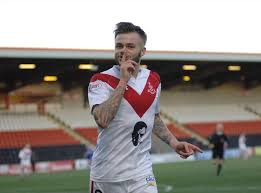 As some of you may know Airdrie won an absolutely enthralling and at times extremely frustrating game on Saturday 3-2 which means that tonight we take on Alloa for the first leg of an encounter that if successful will mean that we could be playing JC's team Raith Rovers for a place in the Championship. We will be back down to our core tonight of myself, Leo, the Wilson brothers and father John. No American, German or English friends in our part of the crowd at least to cheer us on. Perversely,  Brian, it will probably be warmer than it was on Saturday, it did get quite bitter with the wind swirling around and the fact that the sun was behind the main stand. We will be hoping for less schoolboy errors tonight but they have just been part and parcel of the team's game this season.

Airborne Toxic Event - The Winning Side

Re. yesterday, just to confirm - I did not hear a better song

Guys, they best they have played all season. It was a joy to watch. You would have enjoyed it and at 21:00 hrs it was warmer than 16:00 Saturday, sorry!