Not As Good As The Cover 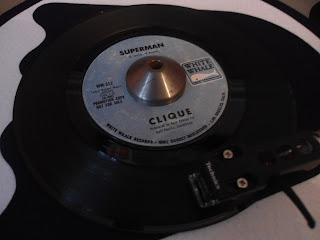 There is an old joke - how many soul fans does it take to change a lightbulb?

One to change it and four hundred to scream, it's not as good as the original.

Well in the case of today's track the opposite is true for me, in that the original is ok but the cover version is just so much better.

Superman by Clique was released in 1969 and has that kind of psychedelic pop sound and if it hadn't been for the later REM version I would probably hold it in higher regard. As it is the later version is not radically different from this recording it's just a bit faster and a bit louder, more indie if you like. But Clique have to be given some kudos for writing what is a very good tune in the first place.

Brilliant. For some reason I've never heard this, which is odd for me as I usually try to check out the original versions of covers that I like. Thanks for righting that wrong Drew.

I don't want to agree... but you are correct.