My Baby's Good And I Feel Fine 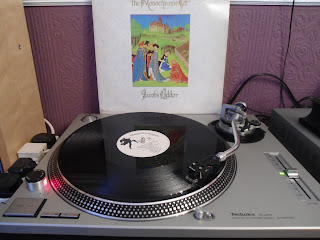 This got lodged in my head today and so I checked the hard drive and found that I had never ripped it. I was sure that I had listened to this on the iPod before but obviously not. So down to the indie 12" single cupboard to rectify the situation. I was going to rip the whole ep as Jacob's Ladder the a side on the 7" isn't even the best of the 5 tracks that is Le Boom Boom, however time and my teenage exploits with vinyl has meant that the record is in less than mint condition. I did however also rip le Boom Boom, my favourite although it does have added snap crackle and pop.

The Monochrome Set - le Boom Boom
Posted by drew at 08:00

I have this one too. Jacob's Ladder was the first song I heard by them, and I worked backwards from there. Truly one of my favorite bands. Still putting out stellar work to this day.

CLASSSIC STUFF!!! Once I get on a Monochrome Set jag, it's hard to get off it.

Great band. Saw them live a couple of years back and agree with Brian that a lot of the new material is stellar.