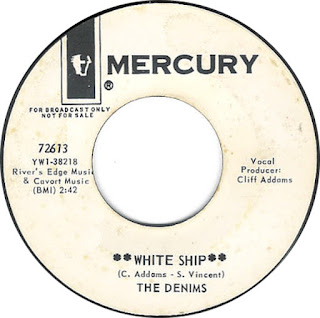 I think that this the only Garage Rock  record that  has been featured here that comes from New York, more specifically the borough of Queens. The Big Apple wasn't renowned for thrashy guitar music at this time, well until the Velvet Underground came on the scene.

White Ship was the final single by the terribly named "The Denims" and came out on the Mercury label. There is quite a psychedelic feel about the lyrics which is quite unusual for a record out of NYC at this time, 1966, when else.

The Denims were kinda all over the place in a very short time. There are lots of British Invasion influences on tracks like I'm The Man, more psychedelic sound on White Strip and even some 50's/Doo Wop on tracks like Sad Girl. But my favorite was The Ghost In Your House Is Me. I can only call it Garage Proto Funk, but it is kind of all over the place musically and is just a really fun Wig Out!