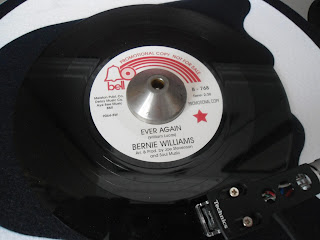 Here is a jaunty, up beat little number to take your mind off of that bloated feeling that all of you who overdid the chocolate yesterday may have this morning.

I don't really know anything about Bernie Williams or indeed Ever Again apart from the fact that it is a very rare record for one released on a major label, Bell Records out of NYC in 1969. The only copy to be sold on Discogs went for £1994.05! My copy needless to say is a snidey single sided re-press. The track was leased to the major label from Del Val Records in Philadelphia where the song was originally released with Gene Woodbury on vocal but justy like the later release posted here it bombed.

Bernie Williams - Ever Again
Posted by drew at 09:40