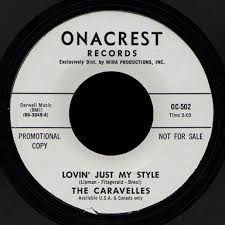 I'm not even going to bother with telling you what year this bit of Garage rock comes from. This is a great bit of fuzzed out, staccato guitars a pounding beat and some prominent vocals. There are a couple of shifts in tempo in this track and some serious guitar shredding.

The band hailed from Phoenix, Arizona and after this single was released on the Oncrest label the band for some reason changed there name to The Holy Grail. relocated to San Fransisco and obscurity and as far as I can tell never released another single. They may have changed their name so as not to be confused with the british female pop duo from  around at the same time.

The Caravelles - Lovin' Just Your Style
Posted by drew at 10:22

Yes it IS '66. Re-released in 2000 on Bacchus Archives BA1146 which includes an instrumental version of this song. Now THAT would be something to hear!

Thanks for that rntcj, it would indeed b good to hear that.