She Drew The Gun 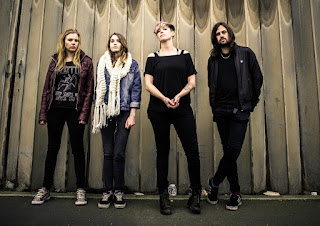 Last Saturday I posted a track from Liverpudlian. Louisa Roach's band She Drew The Gun. After hearing Poem the first time I headed straight to Soundcloud to see if this track was a one off or if there were other gems to find and there were which sent me straight to the band's website to order the album, which was released at the beginning of last month according to the website, however at other places it says that it was released last April. Irrespective of when it was released I think that a lot more people need to hear about this record than I think do at present, not that featuring it hear will further that cause all that much.  It has hardly been off my turntable since it arrived. It is a very strong debut album from the band. At times the album is a bit folkly, at others pretty soulful  but mostly a psychy, indie pop sound but then you might expect that from a band mentored and produced  by James Skelly (former frontman of the Coral) and signed to Skeleton Records. After a week and a bit of listening I can honestly say that there are no duff tracks and for me it will take something extra special to knock this off of the pedestal of find of 2017 for me.

Do yourself a favour and head over here and order it for yourself, you won't regret it I can assure you.

Absolute fantastic Drew. Thanks for the inspiration.

Great sound - thanks for sharing.

Yes, that gets the thumbs up from me too.

Fully intend to follow up this recommendtation....but £22 incl postage was a bit steep...I'll wait and try and pick it up through Mono in due course.

Just to say...I nipped into itunes to have a look.

Great tune indeed, so thanks for that, mate! Loads of stuff of theirs on YouTube as well ...