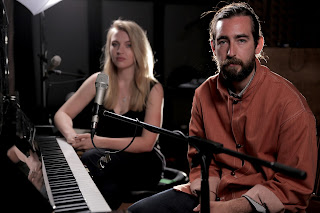 We haven't had any Slow Club here for a while. Last Year's One Day All Of This Won't Matter Anymore didn't really do it for me. That's not to say that it is not a good album, it's just not in the same league as the previous one,  Complete Surrender which as I have said before on several occasions bowled me over as at the time as it wasn't what I had been expecting at all. I am trying to say that Slow Club should have produced a carbon copy of Complete Surrender, even if they could have that would have been boring. I think I may need to sit down and listen to One Day . . . without comparing it to the 2014 abum, although I'm not sure that will be possible. Give Me Some Peace is one of the few tracks that hit me straight away and is still for me the high point of the album.

You deserve a commission for all of the copies of Complete Surrender you helped sell.