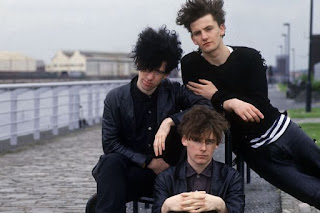 The recent rekindling of my somewhat dormant love for the Jesus and Mary Chain shows no sign of abating anytime soon. Last week ventured into various record boxes and cupboards and retrieved all of my 7", with the exception of the 4 that are in the red "grab in case of emergencies box" which resides in the dining room, and also the 10" and 12" singles. After giving them all a good clean I decided that my idea to go through them in order a and b side was a bit too, well, sad is the word that sprung to mind and so I decided to mix them up and randomly play them, It was no surprise to me that my favourite ones are the ones from 1984 to 1988 and of course 1985 being the strongest year but surprising 1992 was a very strong year for single releases from the Reid's too, although I bought these singles I think my main musical focus was elsewhere at this time.

I have also spent quite a bit of the last week or so listening to Damage and Joy. I still can't quite believe that when I heard of the release of this album I was in two minds whether to buy it or not. At the time I was worried that it would be a dud and would forever taint my view of one of my favourite bands for good. When I did put the first piece of vinyl on the turntable it was with quite a bit of trepidation, I had forced myself not to listen to any of the streams of the album and had only heard the couple of tracks that were getting flogged by 6Music. To say I was not disappointed is an understatement, it was one of the best things I have heard this year, granted it was still March at the time but it was very good so I played it again and then again and after these initial listens a couple of things became clear, some of the lyrics are nonsense with Jim Reid's tongue firmly lodged in his cheek  (I've got a pistol in my pocket, it's gonna shoot it's load) but that doesn't really matter if I want deep lyrics I will go elsewhere and I would have cut two or three tracks out but on the whole it was a very good album, a hell of a lot better than Munki, their last album from 1998.

After repeated plays the enjoyment of the album didn't decrease however a strange anxiety started to creep up on me. I started to worry if the album was as good as I thought iit was, or did I just think that it was that good due to very low expectations or worse still was I succumbing to the "dad rock" phenomenon and getting excited due to some nostalgia trip. If it were to be one of those I just hoped it was the first, being the lesser of the two evils in my head. after another week of listening I think that my fears are groundless and it is in fact a very good album by two guys who let's face it at this stage in their lives are not going to come up with a revolutionary new sound or indeed need to, they did their bit by taking pop music by the neck in 1985 and throttling it within an inch of it's life and then giving it a new darker side and bringing back some much needed attitude.

Here are a couple of live tracks recorded in Detroit way back when and included on the Sidewalking 12". One last thought when we are talking about the Mary Chain live. I have seen comments that people think that they are just "going through the motions" live. Now, the last time before a couple of  Friday's ago was in 1988 so can't really comment on how they were live in the 90s and beyond. But for me Jim Reid was more engaged than on any of the three previous occasions that I saw them, the first time they really looked like the Barrowlands was the last place that they wanted to be and that us the audience were worse than some dogshit that they had tread in. The only thing I will say is that they didn't seem to be as loud but then again my ears and possible my memory ain't what they used to be.

The Jesus and Mary Chain - Taste of Cindy (Live In Detroit)

The Jesus and Mary Chain  - April Skies (Live In Detroit)
Posted by drew at 11:02

Drew embrace the old age!
The album is good but my view is probably as tainted as yours!
Jimmy

You have convinced me. I'm going to reach into my pocket and blow my wad on the new album. Yuck!

Taste Of Cindy is one of my all time fave songs by anyone. When that came out I was doing my Mod thing and trying to form a band, but this was one of the tunes we played. I was sixteen, my amp was shite, but at full volume it distorted and covered everything in feedback. I was trying to do mod pop through a love of JAMC and The Stooges. We did Motown covers in that style too.

"Did I just think that it was that good due to very low expectations or worse still was I succumbing to the "dad rock" phenomenon and getting excited due to some nostalgia trip."

Hell, if I start analysing things to that extent then I'm totally fucked!

Great piece Drew. So glad the effort to get to the gig was worth it.

Yuck indeed Brian but innuendo aside you will love it, I think. We can discuss further face to face in May.

Si - the Motown covers n that style would have been right up my alley back then.

I am SA very grateful.

Well worth it JC, I am indebted to you for that