I'm Com'un Home In The Mornin' 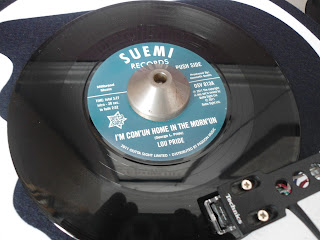 I've always found a contradiction in the feel of today's track and the sentiment of the lyrics. To me the music and tone of I'm Com'un Home In The Mornin' had a kind of sinister atmosphere, however the lyrics are about a guy who has been away for a considerable time and whose love has been desperately awaiting his return and how he will be returning in the morning. I have seen this song described as psychedelic soul and it certainly not a typical northern soul track especially the strange horns on the outro but a great tune none the less.

The single was released on Suemi Records from El Paso, Texas in 1972 and an original copy would cost you at least a grand.

That pretty good Anon, thanks.