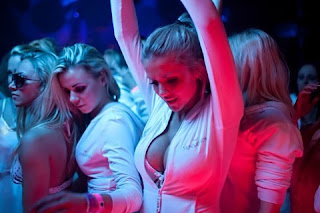 Last weekend when not blasting out the Velvet Underground I spent the rest of the time listening to Primal Scream, thanks to SA's posting of a different version of Higher Than The Sun. So I dug out all of the 12" singles. I have everything from Crystal Crescent up to Kill All Hippies apart from Rocks which I never bought at the time as the song irritated the fuck out of me and have never felt the need to purchase since. I decided to traewl through the myriad of b-sides, and remix versions. I played the Scream's version of Darklands three times in a row, just like when I first heard it I am still not sure if I like it or not ( I wonder if the Reid brothers will play Darklands tonight).  I am also in two minds about the Chemical Brothers remix of Burning Wheel, it's just a typical Chemical Brothers remix from that time and sounds a bit dated to me. The track that really stood out for me last weekend was the disco mix of If They Move Kill 'Em with it's low slung groove, totally skewed horn stabs, the best fucked up wah wah guitar this side of Hendrix topped off with the Wild Bunch sample, there is so much going on in the track. One of Brendan Lynch's best productions for me.

Airdrie won  1-0 last week in an hard fought, very enjoyable game and if they had scored all the chances they had we would have won by at least four goals. The league table is extremely tight with three teams, including the Diamonds in joint third place. If they are to make the play-offs they can't afford to lose many of the remaining 7 matches. I am not to hopeful that they will come away with anything from Saturday's away match with Livingston who are running away with the league.

By the way,  did I mention that I'm off to see the Mary Chain tonight.

I think you featured this pohoto before, Drew, there is something in it which makes me think I've seen it before ... whatever this might possibly be ... alas I can't put my finger on it right now!

Ah, and enjoy the MC tonite, wonder if they're still as loud as they were when I saw them back in 1986?

If they move kill 'em is a top track, no doubt about it. I kind of like the Darklands cover too.

I recognised the picture straight away too Dirk. Something about it that stuck in the memory.

I have indeed posted the picture before and surprisingly you too commented then too.

Not as loud as I remember them being Dirk but absolutely excellentl.

Leave it to Dirk to remember the photo! This mix was new to me. Thanks for the listen.

I commented on the post which featured this very photo.. but I cannot remember what I said..