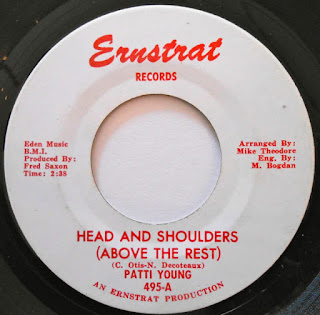 Back in the early 2000s' I dreaded hearing today's absolutely classic Detroit tune on an advert for shampoo, after all brilliant northern tunes had been used to sell chicken, credit cards and fucking awful wine, so why not hair care products? Recently we have had one of the best used to persuade us to buy fucking eggs for christ's sake! There is a story on one of the soul notice boards about how this was offered to Proctor and Gamble for use in their ads at the time of the release but it was rejected as it sounded too black but Patti Young was in fact a blue eyed soul singer of Italian extract,  However I'm not sure of the validity of the story apart from Patti not being African American which I think is true.

Patti Young's classy, typical Detroit sounding tune was released on the Ernstrat label in 1965 and surprise surprise flopped and as a result is pretty rare. First aired at the Torch, it was big on the  northern scene in the 1980s but has kind of fell out of favour these days if what I read is true, can't understand why as it is a belter.

I think it is a belter too- new to me. Thanks.

how was the mary chain??

They were magic Jimmy. I left with the feeling that middle aged men can still be relevant.

What a great song, Drew

I saw them do the Psychocandy tour and felt similar, William looks such an odd ball with the grey spiky hair.
New album out a few female duets on it!

Hope you and family are well and we will get a beer sometime!