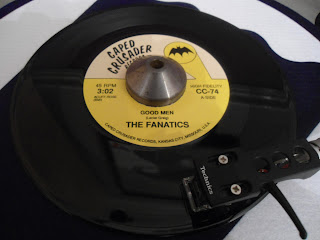 If I told you that today's track was another excellent stomping piece of American Garage rock, could you hazard a guess at what year it was release?

Well technically you would be wrong as this song was unfathomably never released but was recorded in that year.

The Fanatics or Neal Ford and The Fanatics as they were known back in the 1960s were from Texas and contemporaries of 13th Floor Elevators and The Moving Sidewalks. The group were formed in 1964 by Ford, already a veteran of the local music scene. The band released their first single, I Will Not Be There in 196. The single was quit aptly titled as the band shortly afterwards went on a hiatus when Ford wasn't there due to being called up by the Naval Reserves. On his return the group started up again, recorded a second single and started work on their only album which would be released in 1967 after a further couple of singles the second of which Gonna Be My Girl received some attention nationally and they released a further single I Will If You Want To which they hoped would be tgheir breakthrough but sadly received little airtime. The band continued on the local live circuit until calling it a day in 1969. Good Men was one of the original demos for the album but for some reason didn't make the grade and languished unreleased until Caped Crusader Records put it out on 7" in 2007.