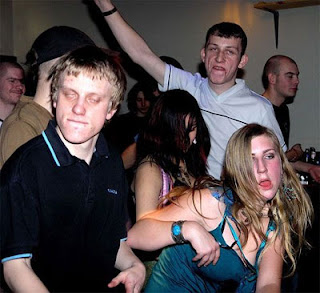 There is only one thing worse than a middle-aged man with no where to go on a Friday night and that is to be a middle-aged man with somewhere to go on a Friday night, I for one really can't be arsed. But tonight I have to go to the 21st birthday party of my favourite nephew. Some of you may recall his 18, yeah the one where none of the girl friends were invited as "all they do is cause bother". I think tonight's event will be slightly different. But one thing's for sure that in being amongst the bright and not so bright young things the age old adage about youth being wasted on the young will probably be muttered by at least one of us over the hill used to be's and the rest of us will look on jealously wishing it was us doing it all over again, One plus point is that  Lewis,  as attested by his attending the Orb with me and going to the Sub Club often,  likes a bit of techno, so the tunes should be good at least unntil the over 40s have had enough drinkand start moaning that they want something to dance to and the old favourites, ie the worst of the 80 and 90s will get an airing and it will turn into a bit of a nostalgia fest.

Still, I have the football to look forward to at the weekend. I say look forward to, what I mean is dread as we were gubbed three nil on Tuesday night in Brechin. So it is not looking good for tomorrow's home game against Stenhousemuir who humped us five nil in December and then 4-2 in January. The joys!

Enjoy Drew. The 21st and the football.

A lot of those 21 year olds will looking at you and be jealous of the fact your life has brought so much such as riding your scooter, experiencing big fields, DJing and blogging (among other things); in comparison they will be dreading what life has in store for them.