I think we will stick with the drum and bass again this week although tat the time it would probably have been classed as Jungle and another hugely influential track from a couple of years before the Alex Reece track from last Friday. Origin Unknown were Andy C and Ant Miles. The " . . . long dark tunnel" sample was lifted from a BBC documentary on out of body experiences and the "31 seconds" comes from the countdown to the launch of Apollo 11. Valley of The Shadows was actually the b side of the 12" single. The a-side The Touch although not a bad record is a bit too fast and furious and this is maybe why Valley got the dj attention being a bit,  though not much, mellower. 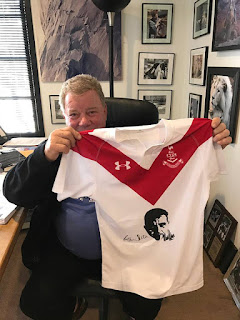 Airdrie's attempts to inveigle the cream of the star explorers to the cause of the Sensory Room for children at the Excelsior reached the pinnacle last week when none other than James Tiberius Kirk agreed to join Luke Skywalker in signing a shirt. You still have three days to bid here if you are feeling flush.. Maybe he can help the team to boldly go where they have rarely gone this past wee while and achieve a home win and a much needed three points against Stranraer at home tomorrow.

Origin Unknown - Valley of the Shadows

Its a nice jersey btw

Best top in the world boys. We will not be letting SA's brother near our strips

After listen to this, I had to go to this Blackman- Bastards Rmx https://www.youtube.com/watch?v=8dU5XZV9C-4&list=RD8dU5XZV9C-4#t=18 A favourite of Mrs Snipers' 3:24 mins a highlight.

Never heard that before Jake, that is bizarre,

Ha. He'd be on safe ground with that chevron.
Swiss Adam

Love that line "It's like a bloody library out there"