You're In My Mind 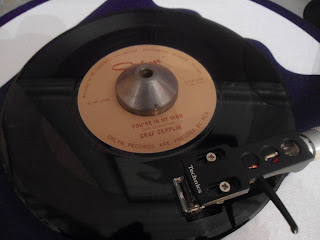 This Garage on a Tuesday lark has turned into a thing. It wasn't my intention for this to happen but over the last wee while I have been listening to a lot of this kind of stuff, Today's track you will be surprised to know does not come from 1966 but a couple of years later and is a tad more psychedelic man than what normally appears here. Graf Zepplin were from OAk Park Illinois and formed in 1966, so we have a connection to that great year for this kind of music. The unique spelling of Zepplin came about after the drummer incorrectly spelt the name on his bass drum. Like a couple of other tracks that have featured this one was the result of the band winning a battle of the bands competition with the prize being some studio time where they laid down this great piece of psych rock. 500 copies of the single were pressed with a kind of hippy ballad, Sunset on the flip. My copy is of course a boot as an original would be well out of my price range.