Albums of The Year 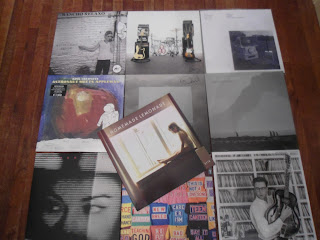 There are not too many reasons for me to look back on 2016 fondly, it has been quite a shitty year for many reasons. One good thing about it was the resurgence of the long player. I noticed that the albums that I bought this year really hung together and flowed as an album should do. I'm not sure if this was deliberate on the part of the artists or just that I have rediscovered my love for the format but all of the albums in my top ten and in the many others that didn't make the cut felt more than just a collection of tracks compiled together under an album title.

Notable albums for me that didn't make the cut but which were excellent were the latest Brian Jonestown Massacre album, Third World Pyramid which reinforced my view that Anton Newcombe just gets better and better. He was also responsible for the best remix of the year with his reworking of Primal Scream's 100% or Nothing  and you should check out the Berlin ep he produced for The Vacant Lots. Another nearly but not quite was Atomic by Mogwai which is at times moving and at other times inducing a feeling of dread and fear matching the subject matter, I suspect that if I had a chance to listen to Let Them Eat Chaos more over the past couple of months it would have made the top ten but I just haven't got into it enough,

One major disappointment for me was One Day All of This Won't Matter Anymore by Slow Club, I think that this is mainly down to my expectations after Complete Surrender which I loved so much. I don't feel that there are as many standout songs on the latest album and also that Rebecca's voice isn't as prominent as it was on previous outing where at times it took your breath away. It is by no means a bad album and I am probably being a bit hard on them but I think that I will always reach for Complete Surrender over ODAOTWMA.

You will notice that Blackstar isn't in the list either. I have to admit that although it is a very good album which I think I will agree in time that it is a great album at the moment I can't listen to it without getting thoroughly depressed and for that reason it could not be considered.

10.  Beyond The Wizards Sleeve - The Soft Bounce

Some great pop moments such as Diagram Girl, space rock in the form of Iron Age and loads of psychedelic moments.

Richard Fearless teams up with Sasha Grey to produce a deep, dark soundscape full of atmosphere. For some reason it had me reaching for The Fifth Mission by Two Lone Swordsmen after the first airing. If you buy the vinyl be wary as some of the first pressings were really poor on side one. I had three copies before getting a perfect one from Drone with a rather nice message of apology from Mr Fearless himself. Excellent customer service.

Lovely, sunny, pure Glasgow pop that always makes me smile. I felt very old at the album launch in Mono, that was until I saw Duglas T Stewart wandering about.

The first time I put side 1 of this on, I thought that there had been a mistake at the pressing plant, the first four tracks were instrumental and very unWedding Presenty, then Two Bridges, first released as a 7" back in 2013, came on and the order of things was restored, songs of love, loss and longing followed. An album that takes a few listens to get really into. The best thing Gedge has done since Take Fountain, not as good as that album but very good indeed. I still don't get Secretary though.

The influence of the Velvets is strong in this one, from the title of the album to the picture of Edie Sedgwick on the cover through the music, no bad thing in my book. An album to get lost in.

When KC went epic. In the review on the Piccadilly Records website Barry says "All of these pieces feel like they could be the song at the end of a movie that we all end up Googling" which is about as succinct and perfect a review  as I've ever read. Every tune is great but Love Life and the bonus track on the 10" single The Long Fade are especially good.

Keep it up Kenny!


4. The Woodleigh Research Facility - The Phoenix Suburb (And Other Stories)

Andrew Weatherall and Nina Walsh get deep and dubby on this excellent double lp. It feels like a natural evolution from Sabres through Two Lone Swordsmen to this.

Third album from this older than their years combo from Carlisle. This is psych rock for the 21st Century that fuses dub and rock with all the attitude of punk. I saw them in Glasgow just prior to the release of this album and they made a beautiful noise, sadly witnessed by too few people.

Classy, Jazzy in bits, soul and R&B at other points. totally essential.

Still not happy that Mr Waterhouse is not venturing further north than Manchester, He did however explain that he couldn't afford it.

In a year as thoroughly depressing as 2016 turned out to be thank god for Carla J Easton responsible for the two albums that put a smile on my face more than any others. I thought that the Ette album was just going to be the taster to the full album from Carla's other group,  Teen Canteen. Both albums are shinning examples of what pop music should be but the Ette album just edges it. My only grumble being that as I have said before Attack Of The Glam Soul Cheerleaders should have been released as a 7" single.

I agree that the album seems to have had a resurgence this year- to my ears as well. The DiV album has some great tracks and your description of WRF nails it- there does seem to be a straight line between sabres, TLS and WRF.

The Ette album is a belter
Got the KC one at Christmas so still got to give it a proper listen. Encouraging so far with the possible exception of Peter Rabbit's Tea

King Creosote has made a late charge on my own favorites of the year, but the one you have here I'm having the pleasure of listening to for the first time is Rancho Relaxo. This is hitting the right spot!

I very nearly excluded 'Blackstar' too, so overwhelming is it's impact on the year and effect on me. I agree with you that the Ette album just shades TeenCanteen's one - both splendid things though. I've already scolded myself at missing out on Wedding Present's LP this year and thanks to your reminder I've renewed my pledge to pick it up asap. A couple more bits here for me to investigate further - I particularly liked the sound of the Woodleigh Research Facility tune. Thanks Drew.