Before Bobby Got His Groove On 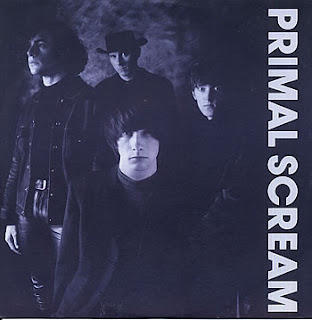 SWC and Badger posted Come Together as number 7 in their Top 200 here today which prompted JC to comment  that he could believe that they posted it over Velocity Girl, a track which I know is a favourite of the anorak wearing C86 brigade but for me was always just a little too short and there is something about the way Gillespie sings " leave me alone" which has always irritated, being a wee bit too whiney for my liking. The post and the comments had me longing for the working day to be done so I could go downstairs and dig out my favourite pre-E Primals moment, as up until now I hadn't ripped the track. Since early this evening I think that I have played the song about ten times. Every time I am transported back to the days when I was thin, was a walking advertisement for Flip and paid over the odds for Lucky Strike unfiltered fags from a tobacconists just off George Square.

It is too good to keep to myself and on the b-side they covered a track by The Shadows of Knight but back then I didn't have a clue it was a cover.

Flip! That takes me back!

I have a real soft spot for Velocity Girl. There was a really interesting avenue that grew out of C86 that Primal Scream chose to ride down but the late 80s were a time of musical flux and so many styles and genres weres beginning to overlap and influence each other, it's no wonder that the change came swiftly for Primal Scream and many of their contemporaries.

You (and many others, I assume) aren't going to like this, but Velocity Girl is quite possibly my all-time favorite B-side. As for the rest of Primal Scream, Gentle Tuesday is my favorite A-side.

Flip! Bloody hell, the money I spent in that place. I think I've still got an old carrier bag somewhere. Great tunes, good to hear some earlier Primals.

I like Velocity Girl- but there's no way I could say it was my favourite PS song. Gentle Tuesday's good too but sometimes the tweeness does my head in.

SA mine's will always be Loaded in no small part due to the memories it brings back of that first weekend after I bought it.

They just played Velocity Girl on BBC6 so maybe someone there is in tune with this.

Absolute fucking crap. Music with no blood in it. Dire shite.

Don't hold back now Anto. Not a fan? That comment has made my Saturday. Magic.