I'm Higher Than I'm Down 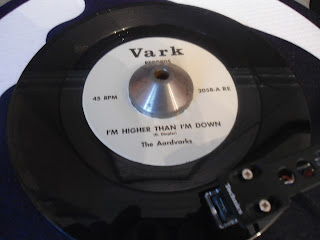 That's it all over for another year and I must admit I've had a rare old three days. Compliments must go once again to Delia for her expert guidance on the cooking of the Christmas lunch. I am now, however beginning to feel the effects of the over indulgence and have designated today and tomorrow as "do bugger all" days.

As this is Tuesday, how about a bit of Garage Rock from that vintage year of 1966. The Aardvarks were from Grand Rapids, Michigan and released four singles in the two years in which they were in existence. I think that this was their debut single. Classic garage rock that was recorded in an old cinema which had been converted to a recording studio, in Sparta Michigan.

The Aardvarks - I'm Higher Than I'm Down