Gonna Cry Me A River, A River Of Tears 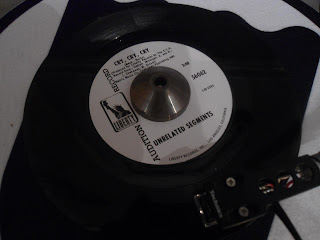 I've been holding this one back for a wee while to give you something special in the run up to Christmas to cleanse your ears of all that awful piped music that can be heard everywhere at the moment. It's an absolute doozy as no one with any sense of credibility would say. Unlike many of the garage bands that have been featured here, the Unrelated Segments had a modicum of success, granted it was in Michigan and Ohio only but there first two singles gained them enough popularity to be the support act for the likes of The Who and The Spencer Davies Group.  Our attention, however is focused on the band's third and final single Cry, Cry,  Cry which bombed in 1968 but which has achieved legendary status in Garage circles since. Great Tune, pish name.

Whoa! Those vocals are wonderful. I bet Richard Hell liked these guys... and the Cramps too.