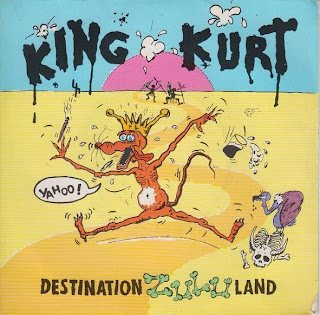 I was going though a couple of the boxes of singles at the weekend looking for things to bring to your attention, when a cover caught Leo's eye. No mean feat as he was engaged on Youtube watching and listening to the inane drivel of one StampyLongNose. "What's that record?" he said. I knew as soon as I saw the 45 he was pointing to that there was a good chance that he may like it as it's loud,  fast and a lot of fun. I was right although he says it's not as good as Too Much Apple Pie (Kennedy) he did jump about alot to it and asked for it to be respun at least four times.

Destination Zululand, I must confess I also first picked up because of it's cover, It was during one of my lunchtime visits to a mate's father's cupboard of records, for the full story see here . I'm not sure whether Scott had a special relationship with Stiff records or whether the label had pushed out the boat on the promotion of King Kurt's first single for the label but he had a copy of the 7" single, 12" single and a rat, I think it was a rat , lying across bins shaped picture disc. I asked C how much he wanted for the 12" single and went away with it. I took the record home after school and tried to play it but it wouldn't play on my Sanyo music centre as the record played from the inside out and my player could not handle that stopping the turntable every time I tried to put it on. I kept the 12" but went back and got the single for 50p. It is a record that I think I played for a couple of weeks and then forgot about for a few years until I became part of the scooter scene when the tune was frequently heard at dos and runs and I'm sure that I sold the 12" to one of the Hamilton Ghosts ( a nearby scooter club with a few psychobillies) for a handsome profit, keeping the seven, Looking back now I wish I had made it a clean sweep and taken the picture disc as well. I did also get the album from the same source which I think was sold on in the same manner as the 12".

I bought the 12-inch for the same reason but was lucky enough to get the record played on my Thorens turntable from the inside. I saw King Kurt live playing an awesome concert.

I missed the story of the cupboard. I was in Italy when you posted that I think, at a wedding.

I had the equivalent, my local record shop closed down and they had all their old stock going back to 1969. I was given the option to look through and buy what I wanted at 50p a single. I think I got all of SLF's singles, all the Undertones, some old Jam singles, Booker T & The MGs, Gen X, Stranglers, Bowie, The Clash and others. I was 14, at the time. Heaven.

we put this on the jukebox in the pub the other night as we had heard it for a few years. Must admit that there were a few elbows flapping around as a few of us were dancing.

I saw them in concert 30 years ago. It was an absolute riot of a show.

...just re-read the Under the Cupboard post. Absolutely superb, Drew. Love the "you always were a bit weird" comment

Still have fond memories of them on TOTP performing this, actually still sounds pretty good after all these years...

I wasn't around for that old post. Now that's a story, Drew. If lunch had been like that, I would have earned an attendance pin for sure.