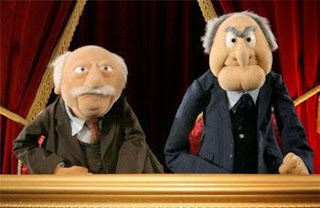 Sorry about this but I am going to have a bit of a rant and those of you with no interest in UK politics shouldn't read any further.

I was reading an article in the Guardian last week where Gerald Kauffman called the new SNP intake in the Commons as "goons" for haranguing Dennis Skinner from his "usual" seat in the chamber. I wasn't that bothered about Kauffman name calling or other disparaging remarks, what caught my attention was his age, 84, eighty fucking four and just elected for another five years! And the man he was defending, the beast of Bolsover is also in his ninth decade. I began wondering how many MPs in the UK are over 70 so I scoured the web, actually put "MPs over 70" into a search engine and after looking at the first couple of entries gave as as I couldn't be arsed. I am all for people working later in life, I realise that I will be working 'til I drop but these two are taking the piss. This will probably come across as ageist and to tell you the truth I probably am being but I think it's about time both of them stood aside and let someone a bit younger with some fresh ideas have a go but they have probably got so used to the gravy train after the forty plus years that they can't bear to give it up.

When it comes to governing, I have to agree. If you put minimum age restrictions on candidates, you must put maximums in place as well. The US Congress is full of old men who rely on their younger assistants to review policy or make policy suggestions. They should just step aside and let the democratic process refresh itself. But you are so right Drew, once you've had a taste of the spoils, you don't want to give them up.

I agree to you and Echorich in every word. In German Bundestag there is one member at the age of 80 and 45 members which crossed the 70s or are close to it. Only four members are in their 20s. So sad that we were ruled by dinosaurs.