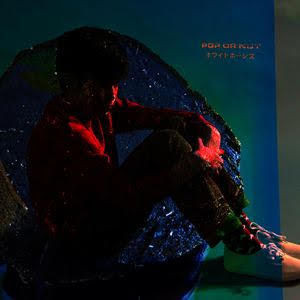 A couple of weeks ago I featured the mysterious Cowgirl In Sweden album which I took a punt on after a couple of people had mentioned it on Twitter,  After a few listens I decided to do a bit of digging to see if I could find out anything about this mob, So after rooting about the internet I found the consensus opinion was that it was most probably a side project of Whyte Horses, a band I had heard of but never actually heard. I consulted Discogs and it appeared that this "pop psych" band hailed from Manchester and had released a couple of albums and a few mix cds. So I decided to start with LP # 1 Pop or Not.  My first thought once I had played the album all the way through was why the hell had I not heard this or even anybody talking about this album as it was absolutely magic, a complete mish mash of styles and sounds that really worked as an album and held my attention throughout.

Still peeved off that it has taken me four years to find this band.

Whyte Horses - Feels Like Something's Changing
Posted by drew at 08:00

I kept reading about these 2-3 years ago and never got around to actually listening to them.

I heard about them a few years ago but never listened to them before and I tried their first record I have to say that it sounds very well to me. I have to dig deeper to them. Thx. Drew

The second album is even better guys