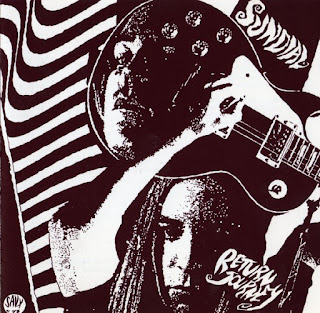 Today's long song came out in 1993 but could have been released any time from the late 60s until sometime last week. Another extended fuzzed-out, distorted piece of space rock that won't ease you into the new working week but should give you a jolt and get you ready for whatever madness that may befall us in the coming days.

I was thinking the other day that over the past few years there seems to have been  a resurgence of psychedelic music but when I look at my cds and records looking for tracks for a Monday morning it's not really the case the music has always been produced. This track being a prime example as it comes from the third Sun Dial album, Return Journey released back in the days when the Brit Pop stuff was just starting to emerge and Trance was sneaking into the clubs.