If This Doesn't Make You Smile 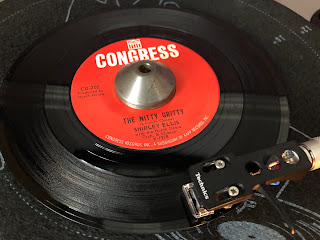 Sure Twitter can be a fucking desperate place with all of the shit but sometimes some of the interactions can give you back your feeling that not all of humanity is like that horrible woman who was once on the apprentice and the guy who has unsuccessfully stood for Parliament 8 times. The other times it can make your day with one clip that has you smiling all day. Last Tuesday  was one of those days when the clip below was posted and it also had me scurrying to the soul boxes as, shamefully The Nitty Gritty was a single that I had but neglected for far too long.

The clip is from the Judy Garland Show and is probably the best example of a white guy getting his groove  until Pulp Fiction. The guy dancing like nobody is watching is Bobby Banas, who was a professional dancer and choreographer who was in West Side Story and also Down And Out In Beverly Hills.

Shirley Ellis is probably best know for the Clapping Song, however in my house it's Soul Time that is played more often. The Nitty Gritty was released on the Congress label in 1963.

What makes this clip is the hair products - or rather in the case of Bobby Banas, the lack of them. While the other five dancers remain neat, tidy and pristine regardless of whatever shapes they throw, Bobby's unkempt locks fly freely hither and thither, giving the impression of him being a wild and crazy guy that you really can't take your eyes off of. Fabulous stuff.