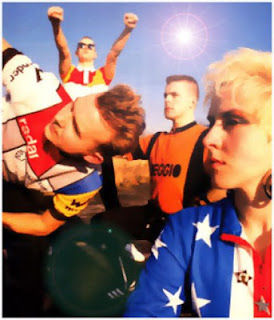 I was sent a link yesterday on Twitter for the C86  Radioshow on Mixcloud  which included an interview with Geoff T from Age of Chance. You can get it here if you are interested.

For about 18 months from the first tine I heard their cover of Kiss and the Kisspower mix on the John Peel show they were one of my favourite bands, I loved everything about them from the mad record sleeves designed by the Designer's Republic, the slogans, the cycling gear at least two decades prior to the explosion of middle aged men in lycra,  the shouty vocals and most of all the use of a dj and sampling in their music.

When I look back at my time in Aberdeen in 1987/88, along with all the house music I was immersing myself in two albums also feature heavily, Public Enemy's Yo! Bum Rush The Show and 1000 Years of Trouble by Age of Chance both of which sounded nothing like anything I had been listening to previously. Age of Chance deserved if not to become superstars Like Chuck D and Favour Flav, should have been a lot better known than they were. Last night I played 1000 Years of Trouble and this may be the nostalgia talking but I think it still sounds pretty damn good. I think this evening I might go through the 12" singles as they include some pretty good remixes two of which done by Hank Shocklee and Carl Ryder bringing us back to Public Enemy.

Age of Chance - Learn To Pray

Age of Chance - This Is Crush Collision
Posted by drew at 09:33

Yeah Drew - they were brilliant indeed, 'Be Fast, Be Clean, Be Cheap' and 'Motor City' were particular favorites of mine back then! Must listen to them again pretty soon upon your recommendation!

I only bought umpteen versions of their version of "Kiss" - all of them fab.

"Age of Chance deserved if not to become superstars Like Chuck D and Favour Flav, should have been a lot better known than they were." Amen, brother.

I have listened to several episodes of that podcast. Very well done show.