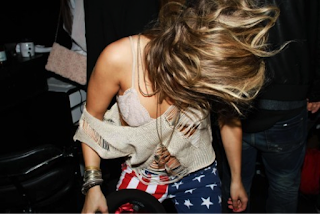 A few weeks after discovering Whyte Horses and buying both of the albums I found myself once again in Monorail, I'm not sure if they have some sort of tracking device but sometimes I find myself in there when I have gone in the town with absolutely no intention of going anywhere near King Street. So I was just flicking through the racks when I came to the W section and the divider stating Whyte Horses but the only thing there was possibly the worst album artwork this side of the Regrettes with the name Justin Velor and 2013 emblazoned across the front. On closer inspection on a sticker it informed me that Justin Velor is none other than Dom Thomas the man behind Whyte Horses and so I decided to take a punt on the double album, there was bound to be enough good music to justify the £6.99 price tag, surely on past evidence of the man's output.

So when I got home I put it on expecting something in the vein of Whyte Horses or Cowgirl In Sweden, I was not prepared for four to the floor house, electro, rhythms stolen from Detroit and a smattering of Balearica, actually the last one wasn't that much of a surprise. After a bit of digging it made a bit more sense as some of the collaborators were Jez Williams from Doves and Graham Massey, others were a bit more surprising, Gerry Love from the Fannies, Chris Geddes from Belle and Sebastian and Lee E John from Imagination. With a squad like this you may be thinking that the album will be all over the place and it is but there are more good tracks than duds with Energizer being the pick of the bunch for me.

Third tier Scottish football, you've got to love it. Three weeks ago Airdrie the Diamonds got an absolute mauling away to East Fife, so none of us were confident for the following week's home game against Falkirk, the team that had been relegated from the Championship last season and during the summer spent big, well in relative terms, to ensure that they would not be hinging aboot in League 1. What we got though was a thoroughly entertaining nil-nil draw where Airdrie more than held their own and could have sneaked it in the last minute. For the first time ever Leo saw the opposite stand open with the large travelling support providing much needed atmosphere to proceedings.

Last week it was time for cup action, the Tunnocks Caramel Wafer Cup, no less and the Diamonds welcomed European opposition in the form of Irish side Bohemians and a bizarre 13:00 Saturday kick-off . Another thoroughly entertaining game with Airdrie just edging to a 3-2 victory.

Tomorrow sees the team away to Dumbarton where hopefully they can keep up the wining ways.

Nice. Right up my strasse.