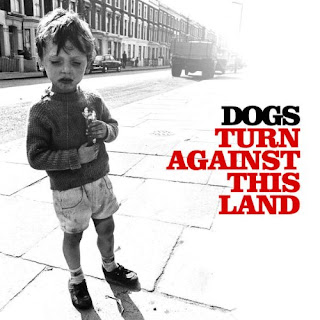 I had high hopes for Dogs after I first came across them when they were supporting the Raveonettes at the Wah Wah Hut way back in July 2004, however they got lost in the deluge of landfill indie that was all over the airwaves, Myspace and Last.fm at the time. The debut album Turn Against The Land was a favourite of mine from 2005, full of punchy songs, with sing along lyrics, some memorable hooks, the odd literary reference and excellent vocals from Johnny Cooke. None of which led to any of the four singles from the album doing any damage to the charts even though they had the endorsement of Paul Weller and the muscle of Island records behind them who subsequently dropped them. The second album which was equally as good and contained one of my favourite songs from 2007, Winston Smith, which has featured on the blog a couple of times was release on the independent Weekender label did even less business and the band kind of fizzled out releasing only one further ep in 2010 and a live album in 2016.

Here is one of my favourite tracks from the first album,

I don't recall this band featuring on XFM Manchester when it launched in 2006 - I've heard some of their stuff since and it compares favourably with acts like Little Man Tate, with whom the station seemed obsessed at the time.

These guys passed me by completely. This sounds good.

One of those shoulda bands for sure. Good of you to take them off the trash heap and give them a good airing for the uninitiated and those who just plain forgot about them... like me.

I think the only other stuff I've got by them I've got from here. I've enjoyed it all too.

Going by this. here we have yet another example of a more than decent band who should've come to the attention of a wider audience.