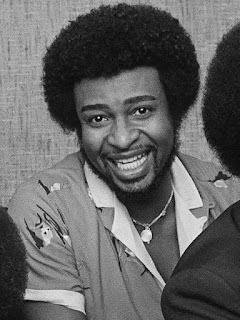 Filling the shoes of David Ruffin as lead vocalist in the Temptations must have seemed at the time to be if not an impossible task then at the very least extremely daunting but that is exactly what Dennis Edwards, up until this point the lead singer with The Contours, did on 28th June 1968 the day after Ruffin was sacked by the other four members of the group after not turning up for one two many gigs. And he did it with aplomb.  It must have been a bit of a pisser for the troubled Ruffin to see the Temptations go from strength to strength with Dennis Edwards up front and Norman Whitfield's change in direction with the  new Psychedelic Soul sound for the group. This led to the group winning the first Grammy for Motown for Best R&B Vocal group in 1969 for the absolutely essential Cloud Nine lp where today's track comes from.

Edwards was the lead vocalist with the Temptations for nine years until he was sacked in 1977  by Otis Williams when he embarked upon an unsuccessful solo career. He returned to the Temptations three years later and stayed until 1984 when he re-launched his solo career on Motown with the hit single Don't Look Any Further, later sampled to great effect by Eric B and Rakim.

He continued touring during the 80s and 90s, firstly with David Ruffin and Eddie Kendricks until their deaths in the early 90s when he toured under the moniker of  "The Temptations Review featuring Dennis Edwards". Which I suspect was not the greatest thing to see as he was the only Temptation in the band.

Dennis Edwards - I Got Find A Way (To Get You Back)

Glad someone from our group remembered Dennis. Well worth honoring today.

If I look back at the Temptations catalogue, I would say it was the Dennis Edwards Temps that I gravitate to.

Lovely tribute Drew. You seem to be penning one every few weeks just now. Sad times

RIP. Gotta have a bit of Temptations every now and then.

Nice tribute Drew. As you say big shoes to fill but fill them he certainly did. Another sad loss in 2018.

Well said Drew. Another sad loss 2018 is shaping to be another bad yearfor losing musical heavyweights.