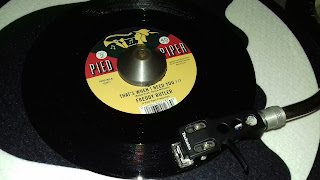 That's When I Need You was a track from Freddy Butler's sole album With A Dab of Soul which was released in 1967 on Kapp records. Someone from the north of England must have bought this album or discovered it while crate digging for something else, as the song from the Detroit singer was booted and I assume found favour with the Rare Soul crew or why would it have been bootlegged anyway. I first heard it when it was included on the flip of the re-release of Voodoo Madamoiselle by September Jones on the Ace/Pied Piper label in 2014.

That was a real charmer. One of those cats out of Detroit whose only audience was on your side of the pond. As we hear today, that’s a real shame. Really like this one. I see there was a CD reissue of the album in the late ‘90s on a U.K. label. Might be worth a dig.