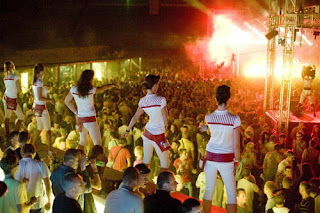 We don't tend to feature the Main room bangers here on a Friday but I dug out this 12" single last week when I was searching for something else. The Mighty Ming by Brother Love Dubs which appears to have gone walkabout. and it sounded really good, a breakdown which for the time was quite novel and a powerful vocal and it didn't sound dated at all. Bedrock consisted of John Digweed and Nick Muir and on For What You Dream Of,  the dulcet tones of Carol Leeming alias K.Y.O. This track was the one that got Digweed noticed and it wouldn't be long, for better or worse, before he was all over the dance scene like a rash, with his mix cds with Sasha. I personally hold them 85% responsible for all the pish that came out in the mid 90s under the trance banner and for dance music retreating up it's own arse. But I do like this.

After a highly entertaining but ultimately pointless excursion to Kirkcaldy to take on Raith Rovers last week, Airdrie are at home to Queen's Park tomorrow. The Spiders are currently sitting 9th in the league and will be desperate for a win to try and get them out of the relegation play-off place and therefore it should be a competitive game. If the Diamonds play as well as they did last week and can find someone to put the ball in the back of the net then they should win but this is the third tier of Scottish football where anything can and often does happen.