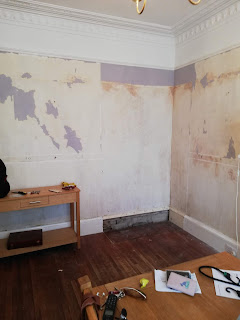 Right where were we.

I was waiting for the dado panel paper which I had sourced from the internet to come and was feeling pretty good about finishing this small job in a couple of shifts. So on the Tuesday the paper arrives and something doesn't look right, I take the paper out and without taking it out the cellophane, put it up against the wall, the pattern is the same but, bugger not in the right dimensions. So it's back to the internet this time putting in the dimensions of the dado panels, it hadn't occurred to me that they would make them in different sizes and it turns out they don't as having no success with my search I decide to go to the source, Anaglypta and enquire about the design, Oriental, if you were interested only to be told that that that style in the dimensions provided hadn't been in production for over twenty years!

Fuck, fuckity fuck were my first thoughts!  As I surveyed the room, my internal dialogue continued "You know what this means don't you my?" "Oh yes" I replied, what it meant was that the panels all the way round would have to be replaced! So Lynn and I had the discussion that night and decided that there was nothing else for it but to replace the whole lot but with a different design as we would have to cut off the bottom of that one and it would look stupid. We also decided that we would get some samples first this time because we were going to be out of pocket by about £13 quid when we sent back the other roll, due to postage and the fact that we wouldn't be receiving a full refund due to it being my fuck-up!

The next thing I did was to consult Stiff as to how easy it was to hing this kind of paper, he should know having served his time as a painter and decorator before diversifying. So he came up had a look at it agreed the the walls were in not that bad  shape but that I would be best to hire a steamer as "that stuff is a bastard to get off and by the way you will need to strip the lining paper off of that back wall above the dado rail and replace it too as you will never be able to patch that corner in so as you won't see the join!"

So the next thing was to source the dado rail. I was confident that this would not be a problem as there were a few timber merchants in Lanarkshire. A couple of days later when I should have been doing something else  I went first to the local timber merchants, "we don't stock dado rail anymore" was the reply. Off I traipsed to Wishaw, showed the guy the off cut, "aye, a've goat that moulding but I'm no sure it's as broad as that" and sure as shit it wasn't! "Have you tried such and such in Motherwell, they might have it but if they huvnae am no confident you will be able to get it" Thanks I mumbled and off to Motherwell I went only to be met with "we've goat sumhin' similar but no exactly the same" and he was right it was the right size and nearly the same but just different enough that you would notice if it was patched in. 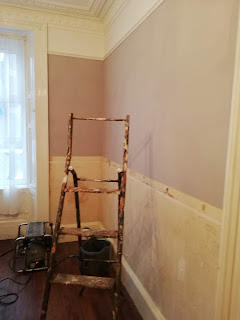 So I got back in the car phoned Lynn and gave her the good news that not only would we have to renew the dado panels but we would also have to replace the rail all the way round for under two fucking bastarding metres of timber that some clown decided to saw off. Silence on the other end of the phone and then "how much do you think it would cost to skim coat the walls?"

If she had been there I would have kissed heras this meant a lot less work for me.

"Right, I will contact Kenny and get him to come and give us a price to skim the walls"

Of course the price was right and we were on for a total transformation of the room. All I needed to do was to take half term off and spend my time stripping the walls and patching in the skirting getting ready for the plasterer.

What a revelation that wallpaper steamer was, Jesus,  that took all of the hard work out of stripping wallpaper and it had me asking myself why the fuck I had never hired one previously, instead of spending hours, scoring, soaking, rubbing and scraping.

So now, I am eagerly awaiting the walls being plastered this weekend coming and then painting it and then the fun part, assembling the Kallax 5 x 5 and then the even more fun part putting all the records back in hoping that I can get them all in that unit and one of the existing 4 x 2 ones with hopefully a cube or two left over for expansion.

I am already into my second week without being able to play any physical form of music and I am beginning to get twitchy but I really feel sorry for Lynn who can't get in her living room for all of the records etc filling the room and who is relegated to watching the TV on the wee portable in our bedroom. 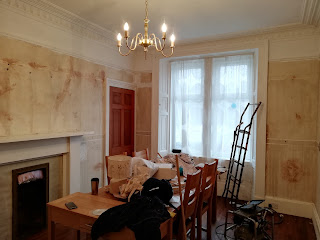 JARV IS - Must I Evolve?

I feel downright bad being so flippant while commenting in the first installment of this series. This has turned into an enormous project. Sounds like your space issues will be solved in the end... and you will have earned it!