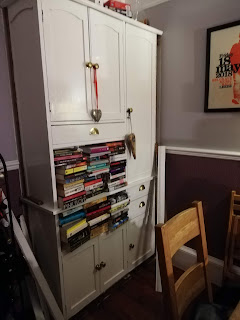 A few weeks ago on a Saturday night, I was sitting in the record/dining room on my new chair listening to music as is my want when Lynn came in to ask me something,  I can't remember what but at the end she said "you really need to do something about all those records all over the floor" I looked around and she was right, there were records all over the place, in neat piles but encroaching on the rest of the room too much. This was highlighted due to the fact that during the festive period a lot of the records were moved out as the room really needed to be a dining room and it was a hell of a lot easier to navigate your way around the room and if I'm being totally honest a lot more pleasing to the eye.

So I agreed but added "what?"

"Well, we could get rid of that for a start" she said pointing to the horrendous 1950s kitchen cabinet that the previous owners had fitted into the corner of the room and up until this point I had managed to ignore Lynn's hints at getting rid of. Not because I found it aesthetically pleasing or thought that it fitted in with the rest of the room as it clearly didn't but because the extra storage was helpful and more to the point I thought that getting rid of it wouldn't be as easy as my better half thought and I just couldn't be arsed with the hassle.

That was until she dropped the suggestion, "we could get rid of that and get a bigger one of those units (Kallax) that could hold all of the records".

Two minutes later I was back in the room with my hammer and a chisel that I had quickly located from my tool box in the cupboard half way up the stairs and was trying to spring the facings from the cabinet to have a look at how it was secured to the wall.

It turned out that the answer to that was not very well, however when I looked behind it I realised as I suspected that this was not going to be as easy as just emptying the cupboard and trying to get it out of the room. oh did I forget to mention that the unit was 18 inches taller than the door frame and just about as wide! It turned out that the guy who had put the unit in may have been a Clerk of Works but he wisnae  nae jyner. Instead of scribing round the skirtings and dado rail he had cut both off! 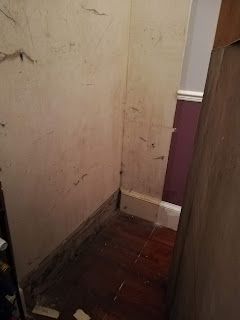 So here was my first problem, as the house is pre 20th Century and the skirtings looked pretty original it would probably be difficult to source the two bits that I would need, I know that skirting board certainly doesn't come 250 mm deep these days. I was less concerned by the dado rail as it looked as if it had been added later and the mould looked familiar not too ornate.

When we managed to pull the cupboard further out to inspect behind it more closely problem number two became apparent, we would also need to try and match up the dado panels below where the non existent dado rail should have been. After consulting the internet this problem appeared to be easily overcome as there were various web-sites offering up the same pattern but at a price.  Fuck it, I thought, it needs to be done and duly ordered the dado panel anagylpta.

I decided to call it a night at this point as there wasn't much else that could be done until the paper arrived and I had sourced the timber.

Not sure where I'm going with this music wise but here is a track from the great, new Whyte Horses covers album, Hard Times  which had taken up residence the week prior to all these fun and games started. It is quite strange that my favourite track from this album should be a Bee Gees cover as during the Christmas holidays I had bought a best off the Bee Gees (pre 70s) cd as I had an urge to hear To Love Somebody and I Started a Joke and had become quite obsessed with the album much to Lynn's amusement. Mister Natural, however is not from that period of the group but from the immaculately coiffured, shiny teethed on the cusp of disco dominance period.  The other thing about this cover is the singer, La Roux, who I only knew previously as the shrill sounding singer of In For The Kill but she sounds nothing like that on this track.

If you haven't already purchased this album you really need to do so, with covers of Lou Reed, Plastic Bertrand and Curtis Mayfield tracks in amongst the more obscure it is a great listen with some very good guest singers including John Grant, Tracyanne Campbell and Gruff Rhys amoungst them.

Looking forward to more instalments of The Project, Drew. Re. storage, I am very fortunate that my partner suggests I need something new then proceeds to make it herself for me.

Like George, I'm looking forward to seeing how this pans out. My DIY skills are famously non-existent, so if your gaff ends up looking the business, I might be able to find a couple of jobs for you!

Yes, I know, I'm a bastard, but further posts about the project's proceedings will definitely mean fun … for me!

I feel quite stressed just looking at the pictures Drew.

Man, that sucker was really built in there, wasn't it? Hey, do what you have to do to get more space and organization for your music. It's worth the aggravation. My mother was in town for the past two weeks (she left yesterday), but I took down the spare bed in my music room about two years ago to create more space for records. We worked it out, but it wasn't easy. Bottom line: Our records always win out in the end.

Brian, of course they do! My music room has a lock, I have the key.