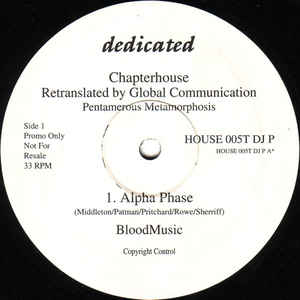 By 1993  Shoegaze was a much derided genre, in fact a part from a very few bands from the late 80s, I body-swerved anything tagged or reviewed as such as most of it was just pish reliant on effects pedals and distorted meaningless lyrics made by white pimply studenty types who were unable or unwilling to get grooving and dismissed music made by machines as in some way as not being real music. So Chapterhouse were a band that I took absolutely fuck all notice of , even though they seemed to be in every music mag all the time. That was until I heard that that they had been remixed by Global Communication, a.k.a The Jedi Knights or alternately known as Reload, this piqued my interest and I subsequently bought the 12" single that contained two of the phases of their reworking of the shoegazers album Blood Music. I can't tell you how radically different these tracks are from the source material as I have no interest in hearing the originals but I suspect that Chapterthouse fans or anybody else would have difficulty pairing these two ambient masterpieces with anything from the original album. I am at a loss as to why I didn't buy the cd, Pentamerous Metamorphoses,  containing  all 5 phases of the remix project, possibly because I considered the title pretentious wank or more probably because I was even less inclined to buy cds back in 1993 than I am now as back then the pricing was reversed with cds being ridiculously expensive and vinyl being better for your budget.

Pretentious wank, the title of the cd may be but the two "phases", even though they have been named after Greek letters of the alphabet, have stood up to the test of time pretty well. Here is the Alpha phase.

Well I'm somewhat familiar with the music of Chapterhouse (and still own their first album), but would never have made the connection with this tune. I have to wonder what elements of the original they used in its creation. A very nice start to Monday morning nonetheless.

I love Alpha Phase and Epsilon Phase. I would go as far as to invoke another term which might make you fold over in pain Drew - Post Rock. Not all Post Rock has to sound like Radiohead recording in a public toilet. Sometimes it's about the rhythm. Thats what I love about Alpha Phase. Global Communication remixes. Epsilon Phase takes the away the melody and the rhythm and leaves the mood.