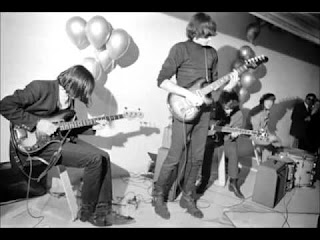 This is not the mellowest way to start the working week but I can't think of many better ways than a dose of the Matrix Tapes to get you going, if I keep this blog going long enough I will probably get round to posting all 42 tracks but for now here is an even more frenetic version of White Light /White Heat, un-fucking-believable! If I had a time machine my first stop would be Thursday 13th November 1969 and the destination San Francisco and stay until the 19th so I could watch the whole residency. I wonder if the people present at the time realised that they were seeing a band at the peak of their powers who would go on to hold such a legendary place in the pantheon of 20th Century music or did they just come away thinking "that was alright, a bit noisy in bits but not bad at all".

If you got the time machine Drew - sign me in. I will join the journey with pleasure.

Could you check the link to the song there Drew ? I clicked it and my email client fired up !

That is very strange, should be sorted now.

It is. Thanks old chap.

Every time you pull this one out I say I'm going to buy it. Will this be the listen that finally puts me over the top? About to hit play...