Nothing But A Heartache 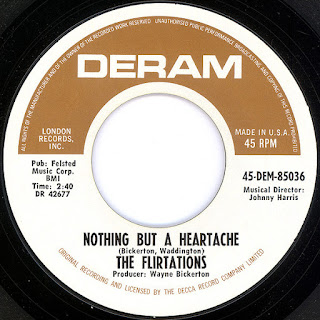 This is such a good song with a bit of a strange provenance. The  Flirtations were a trio from South Carolina and recorded Nothing But A Heartache in 1968, so far so nothern soulie but it was released on the Decca subsidiary Deram and produced by Wayne Bickerton who co-wrote the song with Tony Waddington who as a production writing duo would go on to have great success with the Rubettes during the early 70s. Unfortunately this track failed to make the top 50 in the UK but did make the Billboard Top 40 Stateside where it spent 14 weeks in the Top 100.

The Flirtations - Nothing But A Heartache
Posted by drew at 08:00

Great song and a fab sound - should've been a big hit.

Very nice. I was, however, secretly disappointed that you weren't waxing lyrical about Bonnie Tyler today...

That's in my head now Rol, cheers. I am now going to have to listen to it.