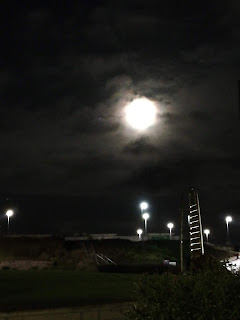 A collaboration with the Orb and one member of Pink Floyd or another was something that had been rumoured about more than once before it did happen, in fact there is a bootleg out there of remixes of Dark Side of The Moon that purported to be by The Orb but was in fact bollocks. So when David Gilmour collaborated with Alex Paterson and Youth on the Metallic Spheres album, 10 years ago now(!)  it was kind of a big deal and people had great expectations which were partially fulfilled, there is little doubt over who the is playing the guitar that wafts in and out of the two tracks that make up the album but I find that it doesn't hold my attention the way that the previous album Baghdad Batteries did. However, if you had pre-ordered the album you got a download code (hoi, record labels remember download codes?) for a bonus ambient mix which I must admit I have played a lot more over the subsequent years than the full album.

I partook of a little too much wine over the weekend, so this is a welcome way to start Monday morning.