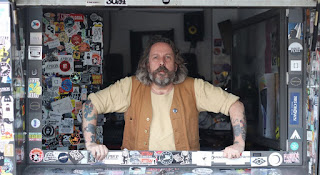 God I wish that I wasn't writing this post but there is no way that I couldn't mark the passing of the genius that was Andrew Weatherall. I know that that word is bandied about with abandon these days and therefore the meaning is diminished somewhat but what else can you call someone who goes into the studio with absolutely no experience in remixing music and turns a bluesy ballad into something that helped to define a genre of music and also turned many an indie kid onto the joys of E and dancing in fields to repetitive beats. Then for the next three decades shifts, changes directions, runs clubs, sets up labels, writes, collaborates with some of the most talented musicians around,  becomes artist in residence for a publisher and never once has his name on anything that is stale, tired or just going through the motions.

I still remember vividly the day that I brought Loaded home played it, got straight on the scooter down to El-Arish barged in to where Stiff was sitting in the living room watching some pish on the telly and excitedly breathlessly, stated  "you've got to listen to this!" to which his question was

"Primal Scream" I informed him

"Fuck off" and a snigger was the reply

"No really you need to hear this"

"Aw, alright" he replied humouring me.

So I cranked up Mrs G's ancient stereo, put the 12" single on and watched his face change from slight annoyance that his concentration on whatever he was watching was interrupted, to bemusement and then sheer joy as he began to comprehend the absolute brilliance of what he was hearing.

"No way is that Primal Scream"

"It fucking is", and after consulting the back cover,  "produced by Andrew Weatherall"

The record took up squatters rights on Mrs G's stereo for god knows how long after that. The following Friday I went back into Fopp and picked up another copy and that was it for the next thirty years if it had Andrew Weatherall's name as artist, producer, remixer or co-conspirator on it and I could get my hands on a physical format I bought it, even if it was Texas or the xx Teens. I am not going to lie to you I didn't fall in love with it all, some of it took a while to grow on me, a few thing I never got at all, the remix of Nowhere by Therapy?  but 99% of it is essential. As far as remixes go I still maintain that there is only one track he has never improved upon the original and that was Fallen by One Dove but then again it is impossible to surpass perfection. He did however do a wonderful job when he produced Morning Dove White, I think more of an exemplar of his talents than Screamadelica but I know I am in the minority on that one.

I was ever so slightly disappointed by the second Woodleigh Research Facility album, 127 To Facility 4 when I managed to get one of the limited copies just before Christmas, it had the feel of a work in progress to me, sketches of tunes when I first heard it and I still don't think it is him at his best but then again the Unknown Plunderer 12" which is supposed to be released this Friday sounds absolutely fantastic and the recent remixes of the thirty eight year old Venetians track, Son Sur Sun, is space disco at it's best.

When I think about it, the Guv'nor over the years has had as much of an influence over my music collection as Stiff's older brothers and my cousin Stuart. He set me off searching for things either through samples used, music discussed in interviews or tracks played in his dj sets or his radio shows, the later being responsible for me being financially embarrassed long before payday most months! As |I was typing this I could see the post-it notes containing records to buy from the last few Music's Not For Everyone shows stuck to the wall at my side.

I still really can't get my head round the fact that this overly hairy, uniquely attired, musical tastemaker will no longer be dictating a large part of my music listening and purchasing or that my dream of attending the Convenanza festival in Carcassonne will remain that,  just a dream.

My deepest condolences go out to his family and friends. As John Niven said on Twitter earlier "how much poorer this world is without Andy Weatherall in it".

Two Lone Swordsmen - Get Out Of My Kingdom

Very sorry for your loss, Drew - as one can tell (not only) from this post, you REALLY admired what he did over the years!

Wonderful post Drew. The Guv'nor would have particularly enjoyed the sweary reaction from the Lanark bedroom......

Good post Drew,I listened to Screamadelica on the way to work this morning, it still give me a joyous shiver. He's been an influence on my for over 30 years and this is the first time I've felt so sad over a music hero passing.

A fine tribute to the great man Drew and a very good point regarding One Dove.

What a great way to remember the Professor.

Well done, Drew. Clear to see many in our little community are hurting right now. Keep those records spinning. There is no better tribute to your hero.

Screamadelica remains a fave and seeing them play it live was one of the best gigs I've been to!
if you ever do get to Carcassonne, I live an hour drive from there ;-)

I may just take you up on that Choco,. Was thinking of going for a day when in Gurcan this summer