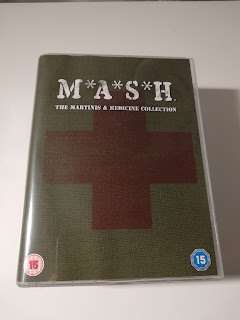 One of my favourite TV programs when growing up was M*A*S*H. So I was quite happy couple of months before Christmas after re-tuning the digi box in the bedroom and stumbling upon an episode on the newly acquired Sony TV channel (48) late one night which turned into being quite ecstatic when I realised that they were repeating the whole show all eleven series on weekday nights, well early mornings to be precise and therein lay the problem, four episodes a night from midnight. I was lucky to get to the end of the second each night before either falling asleep or being told to "turn that bloody telly off". Also after discussing the series with someone on Twitter I started to becoming increasingly annoyed with the canned laughter track. This had not been present when it was originally shown on BBC on I think a Wednesday night at 21:00 and I had successfully blocked it out until it had been brought to my attention.

As it was not going to be practical for me to watch all of the episodes I began to wonder if I should just record them all on the BT box downstairs but as it had already reached series 4 I decided that I would look and see if it would be possible to purchase the dvds of series 1-3, so I consulted Google, not only could I purchase all 11 series (260 episodes)  and  various specials on a 36 disc box set for the bargain price of £26, so I was sold before even reading that I could select to cut the laughter track from the sound, magic.

I am not sure how old I was when I started watching M*A*S*H first time, I couldn't have been that old but I must have at that time watching repeats as I can remember Col Blake and Trapper. I'm sure that I only partly understood it back then, I certainly didn't appreciate the subtlety, cleverness or excellent dialogue and it is certainly a lot darker then I remember.One thing I do remember from when I was a kid is that I was really upset at the last couple of episodes and now am not ashamed to admit I cried, although there is no way I would have admitted that as a fourteen or 15 yr old.

In 1992 the NME put out a a compilation album, Ruby Tracks, The Roaring 40 where they got 40 contemporary artist to cover classic UK #1 singles to commemorate 40 years of the publication. The album is worth owning for the Fall's version of The Legend of Xanadu alone. Other notable performances are Roddy Frame's (If Paradise Is) Half As Nice, Little Red Rooster by The Jesus and Mary Chain and The Manic Street Preachers rendition of The Theme From M.A.S.H which was also released as a single and reached #7 in the UK Charts.

Manic Street Preachers - Suicide Is Painless
Posted by drew at 08:00

My (American) mrs loves the show and there's a channel here that plays the eps all the time. When she first found the channel I was also weired out by the laugh track. I told her about the UK version not having that and eventually we got the DVD box set sans laughing. She watched the entire thing with a completely new perspective.

I've still got that Ruby Tracks, haven't played it in eons.

That was supposed to be keepingitpeel commenting. Ah you know who I am.

M*A*S*H was a television show that my parent whole heartedly promoted my brother and I watching as kids. Coming from a (American) liberal minded household, the themes and humor were just the kind of stuff my Dad though appropriate for his sons. It made conversations about war and death and having meeting your responsibilites in difficult situations much easier to get across.
As for that laugh track, as a kid growing up with US television, you don't even recognize it. It's just as innocous as the soundtracks to many dramas.
The Manic's version is an admirable attempt at the song, but the beauty of the original song is the impact of hearing what sounds like a university men's chorus singing the song. The exact age group who would be conscripted into the Korean and Vietnam Wars.

I can watch the first four (maybe 5) seasons over and over again. Obviously, I prefer the humor to be heavier than the drama. I'll take Trapper over BJ, Henry over Potter and Frank over Winchester. Echorich is exactly right about laugh tracks in these parts. We didn't even notice. All the shows had them.

Oh, and I have been to the site in Malibu where they shot all of the exteriors. There is a signpost with all of the city names just like on the show. When you look up at the mountains you can picture the choppers so vividly.