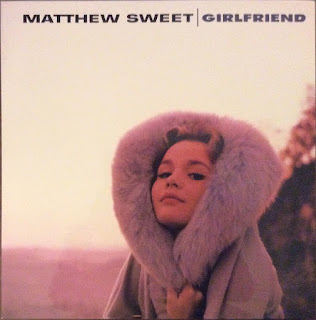 Matthew Sweet had been in bands from the early 80s in his home town of Athens, Georgia, where he collaborated with a certain Michael Stipe and his sister in a band called the Oh-Ok. In 1985 Sweet went solo and signed with Columbia Records for whom he released a couple of albums. His debut Inside garnered critical acclaim but little in the way of sales. In 1989 he released a second album which fared just as badly as the first resulting in his being dropped by Columbia and to compound his woes his wife left him around the same time.

In 1990 he started work on the album which would eventually see the light of day under the title Girlfriend but which was initially titled Nothing Last. The title was changed due to the fact that Sweet wanted to use a picture of a 14 year old Tuesday Weld on the cover. Weld, those permission was sought for the use of the image, was in middle age at this time and although had no objection to the picture being used she did have reservation of the connotations around the use of the picture and the title and so Sweet changed it.

On it's release the album sold extremely well in the US and gave the artist the break he had been seeking. The theme of relationships in all their guises and Sweet's honest confessional lyrics struck a chord with the record buying public and critics alike.

From the first chord of the album's opening track, Divine Intervention I was hooked, the guitar sound has a very late 60s psychedelic feel to it and when it comes back in all to briefly after the false ending it never fails to give me shivers. Absolutely wonderful stuff that should have been a single.

'Girlfriend' is an absolute masterpiece that kicked off an excellent run of albums throughout the Nineties. I was lucky enough to see Matthew live a few times including a show at the tiny Borderline venue in London in 1992. The last time I saw him was while on holiday in New York towards the end of the decade, when Lloyd Cole was sat in a box overlooking the stage. One of my prize possessions is a poster for the 'Girlfriend' album, signed for me by Matthew. I got it framed years ago, but unfortunately it's so bloody huge that I've never yet quite managed to find the right place to display it.

Great piece, Drew. One of my two favorite albums from the decade. I have quite a few Sweet albums, but there are holes in my collection. The thing is, every time I buy one that I have missed it turns out to be great and I wonder why it took so long. He has a knack for assembling great bands. He must be talented and well liked because these well-respected artists like to work with him.

Swede, that sounds like a great collectible. You should find a place for that toot sweet. Ah, see how I did that?!?